How Far would You Go to be Forgiven? 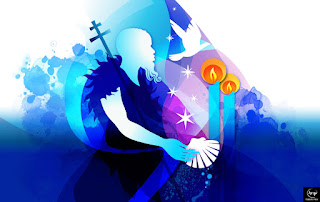 The Second Sunday of Advent / Year B

The 1986 film titled “The Mission” is widely recognized as one of the best religious films ever made.  Set in Argentina in the 1740’s, it tells the story of Spanish Jesuits who set out to Christianize native tribes, including the remote Guarani people who live deep in the forest above the Iguazu Falls. The first Jesuit to visit the Guarani is martyred, but Father Gabriel (played by Jeremy Irons) is able to win over the people with the simple beauty of his oboe’s music.

While Father Gabriel is with the Guarani, a slave trader by the name of Rodrigo Mendoza (played by Robert Di Nero) captures dozens of tribesmen and needlessly shoots a person trying to get away.  It is clear the two Spaniards have crossed paths before.

When Mendoza makes it back to the main city he makes a handsome profit for his work.  However, he learns his girlfriend has fallen in love with his brother and, in a jealous rage, kills him in a duel.  Acquitted of murder, he spirals into a deep depression and exiles himself in a secluded cell at the Jesuit Monastery.  Six months later, when Father Gabriel returns to the monastery, he challenges Mendoza to undergo a rigorous act to penance to find forgiveness and redemption.  Mendoza, believing neither is possible for him, agrees.

His penance is to accompany a small group of Jesuits back up river to the Guarani.  It is an arduous journey made even more difficult for Mendoza because his penance is to drag one of his old slaving nets filled with his armor and swords.  More than once, while attempting to climb a muddy hillside or rock cliff, Mendoza loses his balance and is dragged backward by the weight of the huge, clanky, bundle of junk.  One of the Jesuits approaches Father Gabriel and says, “The other brothers and I think he has done enough” to which Father Gabriel replies, “But he doesn’t think he has done enough.”

The group arrives at the near impossible climb up the Iguazu Falls and Mendoza barely manages, through sheer power of will, to do it while hauling his load.  The Guarani warmly greet the Jesuits, but the mood changes quickly when they see the man who captured and killed members of their community.  Mendoza is on his hands and knees, physically exhausted and covered in mud.  The tribal leader instructs one of the tribesman to get a knife.  The lieutenant holds it to Mendoza’s throat and there is every reason to believe he will exact revenge then and there.  Father Gabriel and the leader have a brief exchange in a language we don’t understand.  The leader then issues an order, again in his native tongue.  The person bearing the knife moves it from Mendoza’s throat to the thick rope he uses to pull the net.  The knife cuts the rope and the tribesman, who lost kin and friends to Mendoza, kicks the bundle over a cliff into the raging waters below.  At this Mendoza breaks down and weeps - bitterly at first, but then with tears of joy.   Through his penance he finds forgiveness in the most palatable way imaginable.  Well, this is only the first 45 minutes of the movie, but you can watch it in its entirety on YouTube (I recommend the version with subtitles).

So here is my question: How far would go to be forgiven?

As we just heard, the Gospel of Mark begins by introducing us to John, a religious figure of some sort who sets up shop along the Jordon River and calls people to prepare for the Lord’s coming by confessing their sins and being baptized.  Perhaps this does not strike you as a successful church growth strategy, but it works.  The text tells us people come to John from all over the countryside.  Not only this, “everyone” in Jerusalem travels to see John.

Now, this is surprising for several reasons.  First, you might think the people of Jerusalem have better things to do with their time than to spend several days trudging through the wilderness to a backwater location.  Next, it is not easy to get from Jerusalem to the Jordon River.  The path is a remote, desolate, downhill, rocky grade with twists, turns, rises, and falls.  Beyond the physical challenges, it is not the safest of journeys; being riddled with bandits and animal predators (remember Jesus set the parable of the Good Samaritan on the way from Jerusalem to Jericho).  And finally, as difficult as the walk to the Jordon is, the journey back to Jerusalem is even worse.  It is all uphill.  When I was in Israel we drove from the Jordon Valley to Jerusalem and there were several times when our tour bus struggled with the grade on a major highway.  I remember thinking I was glad to be riding rather than walking.

So why are people willing to make this journey?  Because they want to confess their sins and be forgiven.  And we get it.  Each of us knows what is like to live with the crushing burden of our mistakes and failures.  “I know my transgressions,” writes the Psalmist, “and my sin is ever before me” (51:3).   Though filled with different symbols of regret, each of us knows what it is like to drag Mendoza’s burden.  How far would you go to have your burden lifted?

Jesus has a lot to say about forgiveness, doesn’t he!  In the Lord’s Prayer he connects forgiving others with being forgiven.  He teaches we must forgive seven times seventy.  He challenges us to forgive our enemies.  He gives us the example of forgiving while dying on the cross.  But nowhere, to the best of my recollection, does he speak about how to receive forgiveness; how to appropriate it into one’s being in order to let yourself off the hook.

It is possible to believe God forgives you but to be unable to forgive yourself.  It is especially challenging to forgive yourself when the consequences of your actions cannot be undone or if a person you wronged won’t grant release to you.  Mendoza was forgiven by the Guarani and welcomed into their tribe, but no such redemption is possible with the brother he murdered.  He must learn to live with what he did to his brother until he can learn deeply and authentically how to receive absolution.

Maybe the reason so many people go to such lengths to see John in order to confess their sins and be baptized is because they need to make the effort.  For whatever reason, the Temple’s sacrificial system, with its easy offerings of this, that, or something else, in order to be forgiven, simply do not break through the penitent’s self-imposed sentence of condemnation.  So the journey to the river is an important part of the process of believing you are forgiven.

So too is the water.  There is something restorative about it.  I am amazed how I enter the shower every morning feeling like a zombie and step out moments later feeling resurrected and ready to take on the day.  When I was immersed in the Jordon River at the traditional spot where John was believed to have baptized, it was a warm day and I was surprised by how cool the water felt.  I imagine the people John baptizes enter the river hot, dirty, tired, and sinful and come out of it refreshed, renewed, and believing they are forgiven.  How far would you go to feel forgiven?

I have only once engaged in the prayer book’s service of a Rite of Reconciliation.  I did something so seriously wrong that participation in the General Confession was not enough for me.  Confessing my specific sin to a priest and having absolution pronounced for it helped, but it did not erase the consequences of my actions.  I knew God forgave me, but I had to live with the knowledge of the hurt and pain I caused.  Years later I was blessed to reconnect with the person I offended and was released from what I did.  Life doesn’t always work out this way, but when it does it is one of the richest blessings imaginable.

How far would you go to be forgiven?  And why do you think John connects confession with preparing the way of the Lord?  I suppose at one level he associates being cleansed with being worthy to be in the presence of the Lord.  At a deeper level, perhaps he associates it with being ready to serve.  It is a call to throw off the old in order embrace the new.  But I suspect at the deepest level unburdening oneself makes it possible to live life as God intends.  You can’t soar if you are weighed down by the things you have done and left undone.  Jesus comes that we might have life and have it abundantly and this is what John invites us to prepare for by confessing our sins and being forgiven.

Posted by Keith Emerson at 1:30 PM No comments: