We are a Slow Church 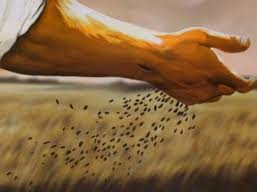 It began in 1989 as a response to the ‘McDonaldization’ of food and restaurants - food that is served quickly and no matter where you are it is always the same.  We have a name for it.  We call it ‘fast food.’  A counter movement emerged in Rome where, after it was announced that a McDonalds was going to open near the Spanish Steps, protesters chanted, “We don’t want fast food.  We want slow food.”  And with that a movement was born that today has over 1,300 local chapters in fifty-three countries.


The Slow Food movement is not just about food.  It is a critique of what Carl Honoré, a Canadian journalist, labels the “cult of speed,” which is rampant in our society.  Fast, he says, is busy, controlling, aggressive, hurried, analytical, stressed, superficial, impatient, active, quantity-over-quality.  Slow, on the other hand, is calm, careful, receptive, still, intuitive, unhurried, patient, reflective, quality-over-quantity.  Slow is about “making real and meaningful connections – with people, culture, work, food, everything.”


On nice afternoons when I was in school in Boston, I drove to Gloucester to sit on a bench overlooking the bay to do my reading.  I liked the feel on my face of the sun and the breeze off the water.  The sounds of the bay – gulls and bells – were calming.  I watched trawlers making their way out and home.  I could go on for some time about those wonderful afternoons, but suffice it to say it was a fabulous environment to soak in theology or church history or whatever.  Gloucester’s best known landmark, the Fisherman’s Memorial Statue (a mariner at a ship’s wheel looking out to the sea), was located not far from the bench where I did my reading.  Passengers from dozens and dozens of tour and school buses flocked around the statue, took pictures, and departed on ten minute intervals.  What is the difference between fast and slow?  They had a picture, but I had an experience of the bay.


The sociologist George Ritzer coined the phrase “McDonaldization” to describe “the process by which the principles of fast-food restaurants are coming to dominate more and more sectors of American society.”  This trend, he says, has four dimensions: efficiency, predictability, calculability (quantifiable results), and control.  These values, which drove the Industrial Revolution, have led to an industrialization of almost every aspect of our lives.  How well do you handle the opposite: messy, unpredicatable, immeasureable, and not under your control?


Chris Smith and John Pattison grew up in different mega-churches, but now, as adults, have chosen to worship in churches that look a lot like us here at St. Paul’s.  They write about their experiences in a book titled Slow Church: Cultivating Community in the Patient Way of Jesus.  To their way of thinking, congregations steeped in the church growth model “come dangerously close to reducing Christianity to a commodity that can be packaged, marketed, and sold.”


There are books and seminars to teach you how to build a church that will number in the thousands.  It involves, among others things, location, parking lots that can be emptied in fifteen minutes or less, high-quality coffee, contemporary music, and lots of technology.  But by emphasizing efficiency, predictability, calculability, and control, these churches sacrifice something essential in order to be large.


Smith and Pattison write of their experience growing up:


Instead of cultivating a deep, holistic discipleship that touches every aspect of our lives, [our churches] confined the life of faith to Sunday mornings, where it [could] be kept safe and predicable, or to a “personal relationship with Jesus Christ,” which [could] be managed from the privacy of our own home.  Following Jesus [was] diminished to a privatized faith rather than a lifelong apprenticeship undertaken in the context of Christian community.


There is nothing fast about apprenticeship, is there!


Smith and Pattison are part of a sizable movement of folks raised in the church growth model who are leaving it in favor of something different.  The slow church movement, they say, “is a call for intentionality, an awareness of our mutual interdependence with all people and all creation, and an attentiveness to the world around us and the work God is doing in our very own neighborhoods.”  It is not private nor is it quite what we think of when we say public, in that it does not involve standing on a soapbox and preaching at passing crowds.  This faith is communal.  It is lived out in and with others – members of our church and the people of our neighborhoods.  By its very nature, it is neither efficient nor predictable nor measureable nor under our control.  It is, to go back to Trinity Sunday, improvisation.  It always takes on a life of its own which we do not dictate, but participate in.


This morning we hear Jesus tell two parables about seeds.  In the first he describes the miraculous way seeds sprout and grow without any help from us.  In the second he reflects on how a small seed, over time, will grow to become a large tree.  Each parable tells us something about the kingdom of God.  There is nothing spectacular about a seed and certainly there is nothing fast.  Once a seed is put in soil it takes time for it to germinate, to sprout, and to grow.  There is very little we can do to speed up the process.  Our role is to water and to weed and to wait.


How does it make you feel to know that God works on a timetable and at a pace different from what you might like?  You can say and do all the right things – come to church regularly, say your prayers daily, tithe you wealth happily, tend to the downtrodden compassionately – but, as they often say in commercials, actual results may vary.  God works in God’s own time and we cannot and should not hurry the process along.


These two parables assure us that God is at work in and through our lives.  That certainly is reassuring.  But they also call on us to be patient and to trust, and that is not always easy.  If you are computer proficient, think of it as trying to teach someone who has never held a mouse and right-clicked.  How natural is it to jump in and take over for that struggling person; to short-circuit the slow process of growth?  After all, we want to be efficient, predictable, productive, and in control.


But life – thank God – does not always work that way.  Just like a slow cooker brings out flavors you will not taste in food that has been microwaved, the life of faith creates deep and sustaining roots over time; time spent in incalculable, seemingly meaningless interactions with God, with yourself, and with others.  It is only over time and taking in the long view that you recognize God has done something enduring in you and with you and through you.


This morning, as we say thank you to Amy Austin for her service as our parish administrator and hello to Cindy Cowan as she steps into that role, we have a wonderful example of what it looks like to be in a place, to allow it to touch us, and to open ourselves to connecting with others.  Amy has not been a person with a job title and a function to perform.  Slowly, over time, she has become one of us and very central to what we think of when we say “St. Paul’s.”  She cultivated something in this place and something very special emerged from it and we are grateful for it.  We are also grateful for the early sense that Cindy is going to “fit right in.”


I would like to think that St. Paul’s is a slow church, in the best sense of that term.  We cultivate our faith and our relationships with one another.  We don’t leave here what we experience on Sunday mornings.  We take it with us out the doors and carry it with us throughout the week.  And most important, we tend to what we see and sense God is doing in and around us.  St. Paul’s is not our church.  It is God’s.  When we are open to what God is doing in and through this place we will be like the surprised person in Jesus’ first parable who does not know how the harvest came to be, but rejoices that it is there.  We too rejoice when we see what God is doing in our lives, in our church, and in our community.  It starts off small, growing slowly, but eventually becomes something like a tree that sustains so much around it.  We are a slow church.
Posted by Keith Emerson at 9:54 AM No comments: