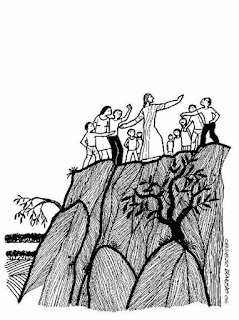 In the 1950’s the Rev. Rufas Womble was rector of the church I served in Richmond.  Still in the area once he retired, Rufas had a reputation for telling three jokes at the beginning of every sermon.  So, in memory of him, here we go...

After listening to a long and tedious sermon, a little boy asks his father about what the minister does for the rest of the week.  “Oh, he’s a very busy man,” the father replies.  “He takes care of church business, visits the sick, ministers to the poor, and prepares for next Sunday’s sermon.”  Then the father adds, “Talking in public isn’t an easy job, you know.”  The boy thinks about this for a while and then says, “Well, listening isn’t easy either.”

A pastor preaches a sermon titled, “The Unknown Depths of God.”  After the sermon a member of the congregation comes up to the pastor and says, “I believe you can go the deepest, stay the longest, and come up with the least of any preacher I have ever heard.”

A newly ordained minister was called to be the pastor of a small, rural congregation.  On his first Sunday he is dismayed to find one of the parishioners brings a dog to the worship service.  The young pastor speaks politely to the man and asks him kindly to leave the dog outside.  The man obliges and then takes his seat.  After the service members of the Vestry tell the new priest the man has been bringing his dog to services for years and it has never bothered anyone.  They fear the dog’s owner might never come back again.  So that afternoon the priest pays a visit to the man’s house and apologizes.  “Don’t worry about it a bit,” the man replies, “It all worked out,” he says.  “I wouldn’t have wanted my dog to hear that sermon anyway.”

In today’s Gospel reading we pick up where last Sunday’s lesson left off.  You remember how Jesus goes to his hometown synagogue and is asked to read the scripture lesson and offer comment.  What we hear today is the response.  Jesus’ sermon was not long.  In fact, it was very brief.  It was not shallow.  But boy, did it ever infuriate the congregation.  They are so mad at him they take him to the outskirts of town and nearly throw him headfirst off a cliff.  Years ago at the church I served in Iowa, a local banker so loathed the preacher’s sermons he paid to have the Sunday newspaper delivered right to his church pew where he made a show of reading it during the sermon.  As rude as that was, it doesn’t come close to what the people of Nazareth attempted.

Have you ever heard a sermon that made you mad?  I mean really mad?  Sometimes it can be a good thing.  Sometimes we need to be brought up short and called to account—sometimes.  But sometimes preachers irritate and to no real end—sometimes.  And sometimes we get upset because we think the preacher should have said something else.

I suppose every preacher has his or her own definition of a sermon and each has his or her own unique approach to this very complicated enterprise.  For me, listening to a sermon is listening in on a conversation.  It is a conversation that has been taking place in the heart, mind, and soul of the preacher.  Participants in the conversation include the Holy Spirit, the lessons assigned to be read, the liturgical time of the year, events in the life of the congregation and its members, current national and world events, and a whole host of other voices that come from books, articles, lectures, and previous experiences.

The majority of the conversation takes place during the course of the week leading up to Sunday’s service; although some parts of it have been going on in the preacher’s innermost being for weeks and months and years.  Each Sunday the preacher attempts to summarize the conversation in a way that is interesting, challenging, enlightening, and spiritually filling to the listening congregation.

I know most people listen to sermons hoping to learn something about God, about the Bible, and about life.  Most of the time we listen to gain a new perspective on these important matters.  I also know it is easy to fall into the habit of listening to hear things you agree with and disagree with.

Some years ago one of my colleagues wrote this in his church’s newsletter:

Sermons are intended to challenge people with the Gospel message.  As such they are not meant to be mere reflections of conventional wisdom.  They are meant to question, to stimulate, and to call us to repentance and change.  If you have listened to a sermon that does not call you to these things then chances are you have not heard a good sermon.

If you hear something that upsets you there are several things you can do.  First, ask yourself if you heard exactly what the preacher said.  Perhaps you misunderstood.  Second, ask yourself if the preacher is right.  Sometimes we react negatively to something we know is true, but we do not want to hear.  Next, go to the preacher and seek clarification.  Statements like; “Tell me more about your thoughts on this subject” or “Did I understand you correctly when you said…” are good ways to engage the preacher.  Finally, pray about what you have heard.  Pray for yourself and pray for the preacher.  Pray that God’s will and God’s word would be known by both of you.

I don’t know what the response was to his article, but I always thought it was good advice.

Because the sermon is an articulation of an inner conversation, the best response to a sermon is more conversation.  It is a conversation taking place in the heart, mind, and soul of the listener during the sermon and the days that follow.  The best sermon complements I receive are the ones when somebody stops by the office and begins a conversation by saying, “I have been thinking about what you said in your sermon last Sunday…”

If the only spiritual food you receive all week comes from the sermon they it is likely you will be hungry most of the time.  Sermons function best when they are used as water to prime your spiritual pump.  Without them sometimes it can be difficult to get the water flowing.  With their assistance, the spiritual well inside of you can deliver reservoirs of living water.

In our Old Testament reading for today, God says to Jeremiah, “I have put My words in your mouth.”  We might ask ourselves who speaks for God in this place.  Upon whose lips has God placed God’s words?  I dare say God’s words are not the exclusive domain of the preacher.  We all speak for God.  Collectively we have God’s word in us.  Discovering this truth, embracing, and unleashing its power ought to be one of our highest priorities.  How will we begin to do it?

Posted by Keith Emerson at 1:06 PM No comments: