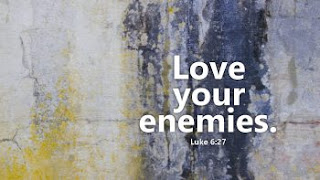 Following Jesus is not for the faint of heart, is it?  Not if you are going to take seriously his teachings and put them into practice.  Love your enemies.  Turn the other cheek.  If someone takes your coat, give him your shirt too.  Forgive if you want to be forgiven.  I get the feeling we should all be wearing t-shirts that on the front say, “I am a disciple of Jesus” and on the back, “I am a doormat.”

I suspect every priest over the course of his or her ministry has had at least one pastoral conversation with a parishioner who is experiencing domestic violence or an abusive workplace environment or something else of a similar nature who will not stand up for himself or herself because Jesus teaches you should turn the other cheek and you should forgive.  Is this kind of passivity what Jesus desires from his followers?

There are six different Greek words in the bible which generally are translated as “love.”  There is a specific word for romantic love and another word friendship or brotherly love and another for steadfast love and another word for the kind of love between a parent and a child.  When Jesus teaches we are to love our enemies, he uses the word agape.  Agape love seeks the well-being of another.  It doesn’t necessarily mean you like the other person or that you support the person’s behavior and actions.  It means you are committed to do good for the other person, regardless of what they do to you.  So, for example, ensuring a person who commits a crime receives competent legal counsel and a fair trial is an example of agape love.  And while releasing a person of the consequences of his or her actions may at times be merited (what we call a ‘suspended sentence’), enforcing penalties for the guilty is not in opposition to agape love.

Martin Luther King powerfully embodied agape while dealing with Jim Clark, the sheriff of Dallas County in Alabama who sought to deny the voting rights of African Americans.  In preparing to protest this, King famously said, “We don’t want to hurt Jim Clark.  We don’t want to see him put out of office.  We want to convert him.”  King called into question Clark’s actions while at the same time demonstrated a respect for his humanity.  This is how you love your enemy.

David Ewart, a Canadian pastor, contends Jesus’ command to turn the other cheek is rooted in non-violent resistance.  When Jesus says, “if anyone strikes you on the cheek,” everyone listening knows only two people are likely to do this to them – masters and soldiers.  Interestingly, this striking was never an act done in violence and always followed a very strict social protocol.  The master had the servant stand before him and struck the servant’s right cheek with the backside of his right hand.  The same with soldiers.  It was about asserting rank, privilege, and power and any deviation from this etiquette demonstrated the striker was not in control of himself and resulted in a loss of face.

Try to visualize what Jesus teaches.  If anyone (your master or a soldier) strikes you with the back of his right hand on your right cheek, do not retaliate.  Instead, turn your face and offer your left cheek.  It might appear to us this sets up the victim for more abuse, but in fact it is an incredibly subversive and empowering act.  You see, it is physically impossible for the striker to use the back of his right hand to strike the left cheek.  The master or the soldier either must break with protocol and lose face or stand down.  Either way, Jesus has given his followers a way to regain dignity and some semblance of power in a situation where they are powerless.

Ewart contends the teaching to offer your shirt to the person who takes your coat is a similar tactic.  In that day, people typically wore a shirt-like garment underneath a coat.  For many, this was all the clothing they owned.  Roman soldiers had the authority literally to demand the coat off your back and you had no recourse against this.  Jesus offers one.  Give the soldier your coat and then offer him your shirt.  If he takes it, you will be left standing there in your skivvies and the soldier will have to explain why he has done this.  You may be uncovered, but you have exposed the injustice of having your coat taken.

Jesus teaches we are to forgive because the measure we give will be the measure we receive.  This too feels like a difficult command and is particularly burdensome on those who have been severely wronged.  Again, every pastor has had at least one conversation with a parishioner who says, “I know I should forgive him or her, but I just can’t.  I guess I’m not a very good Christian.”  Perhaps focusing on the measure given to you by such a person will be helpful.

Those of you who were here when I first moved into my house remember I had nightmarish relationship with my next-door neighbor.  His pettiness and persistent provocations challenged my core principles, among which is I will not respond in kind to your bad behavior.  Agape means how you treat me will not alter how I am going to treat you.  I dealt with a lot of little things and a few big ones.

One day my neighbor decided to build a fence right down the property line, which is only a foot or so off my driveway.  It made opening my car door nearly impossible.  In addition, he allowed his hedge to grow to the property line and twelve feet tall.  As a result, I couldn’t see on-coming traffic as I backed out of my drive, nor could I see pedestrians walking down the sidewalk.  When I pointed this out to him, he suggested I take driving lessons.

This is when I went back to Jesus’ teaching the measure you give is the measure you will receive.  There had to be some kind of consequence for my neighbor’s behavior.  In order to tend to his property on my side of his fence and in order to maintain his hedge he had to come onto my property, which he did regularly.  I informed him he was no longer allowed to access his property from mine.  No trespassing.  He was furious.  I told him I would allow a professional lawn service company to maintain his property which he could no longer access.  After suffering from his behavior for several years, I felt it was time he received something of the measure he was giving.  It was empowering.  And I hope my little story of woe gives you something to ponder as you have to put up with someone intentionally doing one unkind thing after another.

Maybe the next time this reading comes up in the lectionary I will focus on the benefits of loving your neighbor and why forgiving is a healthy and freeing endeavor.  For whatever reason, this morning I feel called to focus more on where the limits are, and how each is meant to protect us, not submit us to even more abuse.  And, as always, I am available for pastoral conversations.  I suspect these teachings open up a lot of questions and bring to the surface a good number of bad and buried experiences.

Posted by Keith Emerson at 10:41 AM No comments: