Clyde, Seymour, and Christ the King 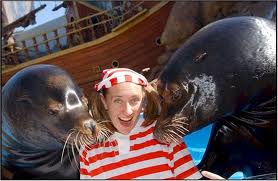 The summer before my first daughter turned two, she and I loved to go to Sea World.  You may not know this, but back in the day there actually was a Sea World in northeast Ohio not far from where we lived.  We bought summer passes and went for an hour or two anytime the mood hit us, which it often did.  We went in the late afternoon, took in a show or two, and then got home in time for dinner.  Now, Shamu the killer whale had impressive size and the dolphins were tremendous high fliers, but far and away our favorite show featured seals named Clyde and Seymour, along with a little otter (think of a Jack Russell Terrier, but in the ocean) and a sea lion, who always looked like he had just gotten out of the Lazy Boy recliner after having too much kelp for Thanksgiving.

This ensemble cast always put on a very funny, highly entertaining show.  The first time we saw it, Ellen and I could not stop laughing at every trick and antic they performed under the subtle direction of their handlers.  The second performance we attended was equally as funny, but I noticed one thing was not the same: the timing was off just slightly on one of the tricks, but a human handler was able to cover the gaff.  The third show had a different faux pas, but again the handlers held it all together with very clever shifts, prompts, and changes.  By the time I sat through the fourth show I realized that no two performances were the same.  These live sea creatures had a knack for getting distracted and their handlers had a talent for getting them back on track.

The otter always made a grand entrance from behind a tiny little door.   We saw one show where the handler called his name and the door opened but the otter was nowhere to be found.  It took several do-overs before they got it right.  At another show Clyde failed miserably to catch a ball on his nose and flick it through a basketball hoop – a trick he performed so effortlessly every other time we where there.  It took three tries before he nailed it.  Then there was the time when the audience was told the sea lion would not be performing.  It made me wonder what kind of bad-hair day he was having.  At still another show, Seymour climbed up to a high ledge, but refused to jump into the pool below.  All that handlers could do was call him down and move on.

The more shows I saw the more interested I became in watching the handlers; watching them adapt and improvise and be creative so that – as they say – the show could go on.  I started to pick up on the looks of relief they gave to one another when they got through particularly challenging parts of the script.  I noticed them holding back laughter when things went comically awry.  And I picked up on the subtle ways they interacted with the creatures that revealed this was more than a performance, it was a relationship.  It was a relationship marked by dynamic interaction, mutual expectations, openness to each other, acceptance of deviations, and love.

Today is the last Sunday in the Church Year.  It is known as Christ the King Sunday – a day when we celebrate the eventual culmination of history under the Lordship of Christ while acknowledging that even now Jesus reigns over the Church.  The appointed gospel readings we encounter on this day never give us a picture of kingship we might expect.  Take this morning’s reading as an example: what does it mean to be a king if you are under arrest and being interrogated by the person who will sentence you to be crucified?  Well, whatever the answer might be, we know if does not include exercising absolute power.  Jesus reigns in a way very different from that.  But how?  What does it look like?

Those shows at Sea World provide something of a window; an image that helps us to understand better just exactly how Jesus rules.  There is a goal to be sure; a way that the performance we call ‘life’ is intended to unfold.  Sometimes we come close to getting it right and other times we fall short: perhaps we are not where we are supposed to be when we are supposed to be there, or maybe we keep bumping into one of the other performers, or maybe we drop the ball, or maybe we refuse to jump.  Does it affect the performance?  Absolutely.  Does it ruin the show that life is?  Never.

And why?  Because we have a Handler who is able to improvise and adapt to the changes and challenges we introduce; a Handler who knows how to interact with the cast in such a way that each of us eventually helps the show move toward its grand finale.  In Christian terms we talk about Jesus being our ‘guide’: the person who points the way for us to go as he walks with us.  A guide honors the freedom of the person being guided, accepts deviation, and deals with variables all the while maintaining movement toward the ultimate goal.  Just like a Sea World handler, Jesus as our Guide does not reign with absolute control, but rather interacts with us in a way that keeps us moving through the script of life.

I find it comforting to think of myself as being something like Clyde and Seymour.  I have a role to play in this life.  Sometimes I get it right, other times I fail miserably, and occasionally I outright refuse.  But I have a Guide who remains in relationship with me.  When my Guide does certain things, I respond and when I do certain things, my Guide responds to me.  Sometimes I play my role perfectly, sometimes my Guide has to use a little finesse, and still other times my Guide must exert outright effort to keep me on track.  Ultimately, it is my Guide’s will that is done.  One thing I know, no matter what I do, Jesus my Guide will keep directing me toward the grand finale and it is in this sense we can say that Christ the King reigns.  The same holds for this world and every person in it: Christ’s desire will be done, but from day to day and moment to moment it requires that Christ adapt to our actions and improvise ways to get us back on script.

So I equate Christ’s Kingship not with power, but rather with Guidance; with being something like the handlers I watched so long ago as they worked their way with those lovable creatures in their charge.  In his book, A Book of Uncommon Prayers, Kenneth G. Phifer gives words to the deep desire I have for this kind of divine kingship in my life:

Deep down within me, O Lord,
is the need for your guidance.

Keep me from hasty action,
the careless word,
the unthought-out reaction.
Steady me that I may know
your Spirit has not been withdrawn from my world,
and your presence is still with me.

Let me finish the last sermon of the Church year with these brief thoughts; lessons learned all those years ago while watching seals perform:

·  You are a wonderful creature, full of life and love.
·  You have much to offer in this world.  You have a role to play in life, so play it to the best of your abilities.
·  Things don’t always go as planned and you don’t always do what you are supposed to do.
·  God is always with you.  Keep looking toward God and listening to God and God will guide you back on track.
·  In the sense that life is like a show, this is your time on the stage.  Have fun with it and bring as much joy to others as you can.
Posted by Keith Emerson at 8:40 AM No comments: