Loving Proof of the Resurrection 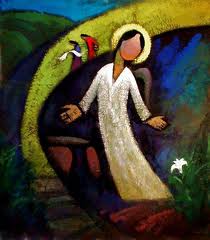 In many respects, Mark’s account of the Resurrection is the least satisfying of the four gospels.  Three women go to Jesus’ tomb to anoint the body with spices.  They know the location because they were there when Joseph of Arimathea placed the corpse in it and sealed it with a large stone.  They are concerned they will not be able to move the stone to do their work, but when they get to the tomb they find it is open.  They go inside to inspect and encounter a young man.  Who is he?  The text does not provide a single hint.  This mysterious person tells the women that Jesus has risen from the dead.  He instructs them to tell the news to the disciples.  He suggests they head to Galilee where they will see Jesus.  The women flee to tomb, terrorized by what has happened, and say nothing about the incident to anyone.
This is how the earliest, best, most accurate, manuscripts of Mark’s Gospel end.  Over the passing decades at least two editors, unsatisfied with the abrupt conclusion of the story, tacked on alternative endings, which scholars recognize as helpful, but not original.  Keep in mind this was the first gospel to be written.  Readers couldn’t flip to Matthew, Luke, or John to fill in the missing details.
Plain and simple, there is not much here to convince a skeptic.  You don’t need to be a C.S.I. investigator to shoot holes in this resurrection story.  Perhaps the women went to the wrong tomb; an unlikely explanation because eventually someone would have gone to the actual tomb, found the body, and put the whole story to bed.  More plausible is that the young man stole the body.  He snuck to the tomb at night, broke in, took the body, hid it somewhere, and returned to tell his concocted story of a person rising from the dead.  Why would he do it?  Who cares?  Its an easier story to swallow than the resurrection.
So lets ask a basic question: why didn’t Mark provide more “proof” that Jesus had risen?  Why didn’t he include a story about the women meeting Jesus or Jesus appearing to the Disciples?  Why didn’t he tell us more about the young man in order to make him more credible and less suspicious?  If Mark submitted this story for publication today a reviewing editor would say, “Great story, but the ending needs some work.”
Here is what I think.  Mark was not writing to prove anything.  He was writing to tell people the story of Jesus.  People were curious to know more about him; what he said, what he did, and why he died.  They were not looking for proof for one plain and simple reason… they already had it.  Proof #1: people who encountered the Resurrected Jesus and told others about it.  Proof #2: people experienced closeness and companionship with the Resurrected Jesus just as we do today.  And proof #3 (which in my estimation is the most compelling): people met the living Christ in the lives of his followers.  Mark’s audience was not looking for proof, it craved understanding; who is this Jesus who makes such a profound difference in the lives of his followers?
Early in the second century, the Roman Emperor Hadria wanted to know why Christianity was spreading so rapidly throughout the land.  An investigator named Aristides gave him this explanation:
“Christians love one another.  They never fail to help widows; they save orphans from those who would hurt them.  If they have something they give freely to the man who has nothing; if they see a stranger, they take him home, and are happy, as though he were a real brother.  They don’t consider themselves brothers in the usual sense, but brothers instead through the Spirit, in God.”
The Christian faith grew one person at a time as a person met the living Christ in the love of one of his followers.  No military force, no intellectual idea, no government sanction, no cultural craze, and not even brutal waves of persecution could stop it.  This passion for the living Christ was all the proof Mark needed.
If this is how the Christian movement began, we might want to ask how is it doing today?  The answer… not so well.  Recent surveys indicate an alarming number of people today associate Christianity with hate and intolerance.  Jesus’ followers are not winning over the world with love, we are pushing people away with hypocrisy and judgmentalism.  If our lives are supposed to be the proof that Jesus is risen, many of the folks who are looking at us are not convinced.
Throughout Holy Week I spent time meditating on and praying over the poem “African Easter” by Abioseh Nicol, a writer from Sierra Leone.  The poem consists of three parts: Good Friday, Easter Eve, and Easter Morning.  He begins Easter Morning with this:
Another day…
Sleep leaves my opening eyes slowly
unwillingly like a true lover.
But this day is different.
The lonely matin bells
cut across the thin morning mist,
the glinting dew on the green grass,
the cool pink light before the heat of day,
the sudden punctual dawn of tropic skies,
before the muezzin begins to cry,
before the pagan drums begin to beat.
Easter morning.
For Nicol, the day breaks like any other.  If we were writing it, we might describe the challenge of waking children and getting them dressed for church.  We might speak of a desire to stay home and relax before the beginning of another busy week.  Nicol acknowledges this as the poem continues:

But still for me
the great rock remains unrolled.
Within my wet dark tomb
wounded peace remains embalmed,
the pricking thorns still yet my crown.
Easter morning.
He goes on to describe the tribal religion he embraced in his youth, but turned from to Christianity.  Listen to how he describes his faith now.  It is mechanical, institutional, lacking substance, lacking life.
I am a good Churchman, now.
Broadminded, which means past caring
whether High or Low.
The priest may hold the chalice,
or give it to me.  It depends
on where he trained.  I only mind
that he wipes the wet rim
not to spread dental germs.
A tenth of my goods
I give to the poor
through income tax.
Easter morning.
Then something begins to stir deep within the heart of the poet:
Yet you Christ are always there.
You are the many-faceted crystal
of our desires and hopes,
behind the smoke-screen of incense,
concealed in mumbled European tongues
of worship and of praise.
In the thick dusty verbiage
of centuries of committees
of ecumenical councils.
You yet remain revealed
to those who seek you.
It is I, you say.
You remain in the sepulcher
of my brown body.
Isn’t that an incredible line, “You remain in the sepulcher of my body.”  I know exactly what Nicol means by that and I suspect you do as well.  But, just as it happened at the closed tomb in the garden, Resurrection comes.  Nicol concludes his poem by breaking forth with a shout:
Christ is risen, Christ is risen!
You were not dead.
It was just that we
could not see clearly enough.
We can push out the rock from the inside.
You can come out now.
You see we want to share you
with our masters, because
you really are unique.
What a powerful image: “We can push out the rock from the inside.  You can come out now”; the stone that covers our hearts, that keeps Christ’s love entombed in us, being rolled away from the inside.  Nicol discovers from within that he can be – even to his masters – what those Christians of old were to the world… living proof that Christ is alive.
His poem leaves me with several questions; questions which I will leave for you to ponder on this joyous day.  What keeps you from rolling away the stone in front of your heart and letting the love of Christ resurrect in you?  Is it fear?  Is it doubt?  Is it indifference?  Something else?  How would your life be different if that stone got pushed away?  How would you approach the day?  the people you encounter? the world in need?  And finally, what would the world look like if you and I became irrefutable, loving proof of Christ’s resurrection?  How would it transform Suffolk?  How would it change this parish?  How would it bring life to your life?
Posted by Keith Emerson at 8:06 PM No comments: