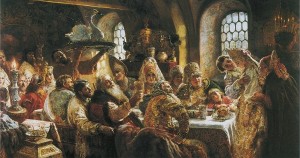 Weddings have a way of bringing out the best in a family and also the worst.  Now, I know you know I was in Ohio last week to officiate the wedding of my youngest niece, and I know you know I have stories to tell about it.  However, since I post my sermons on a blog site and they are open for everyone to read, I think it best if I simply skip over the details and allow your imagination to run wild.


Weddings are potent occasions.  Think how Mario Puzo introduces us to the Corleone family by setting the beginning his first Godfather book at a wedding.  Francis Ford Coppola’s movie adaption of the wedding magnificently captures the subtleties and nuances of each family member’s character, giving us a glimpse of what will unfold for each throughout the trilogy.


Jesus, himself a master storyteller, understands how the setting of a wedding connects with his listeners.  They know firsthand how weddings bring to the surface all kinds of family and community “stuff.”  Today we hear one of Jesus’ wedding parables.  Like all good stories, it takes unexpected twists and turns, startling the audience and creating controversy.


The son of a king is getting married.  The king prepares a lavish banquet to celebrate.  This is what you would expect.  So too is the guest list.  The king invites all the local dignitaries and worthies.  Startling detail #1: the guests refuse to attend.  #2: they abuse and mistreat the king’s messengers, even going so far as to kill some.  Who, in their right mind, would do such a thing?  Well, in Jesus’ story, these people represent the religious leaders and social hierarchy of the day who have ignored God’s prophets for generations.  In the story, the king’s response is predicable: he sends his troops to punish the offenders.


Now, we might expect the king to call off the entire celebration, but here the plot twists again.  He sends his messengers to comb the streets, inviting everyone they encounter, both “the good” and “the bad.”  As a result, the wedding hall is filled with guests, but it is a motley crew of folks to be sure.  These people represent those who have decided to respond to Jesus’ call to repent, to believe, and to follow.


The final startling detail comes as the king surveys his last minute guests.  One person is not wearing a ceremonial wedding robe.  The king confronts him and orders his attendants to bind the person hands and feet and to throw him into the “outer darkness”.


There are many different interpretations as to what the wedding robe represents.  It could be faith or holiness of life or even charity.  Some connect it to the Book of Revelation where the faithful are clothed with a white robe.  Some say the robe would have been provided by the king while others hold each person would have been responsible for bringing his or her own robe.  It is not clear on whose side Jesus’ initial audience would have sided.  Would they have thought it offensive the guest appeared without the robe or would they have judged the king to be unreasonable given the last-minute invitation?


This much is clear.  As Jesus tells the story, every other guest manages to do something this one person does not.  His decision to appear without a robe is a conscious and deliberate choice.  I describe it as an act of defiant individualism.  He is willing to come to the wedding banquet, but only on his own terms.


I have said before I believe one of the most important steps in our spiritual life is a move from a “me-orientation” to an “us-orientation.”  It is an important step in one’s family life, in one’s civic life, and in one’s religious life.  If you are going to have a healthy marriage, happy family, sustained employment, make contributions in the community where you live and the church where you worship, you are going to have to do two things.  First, you will have to discover what you can contribute to the common good and second, you must discern which of your personal desires and aspirations will need to be laid aside in order to become a part of something much bigger than yourself.


A newspaper article from the September 29 Carteret County News-Times illustrates what the opposite of defiant individualism looks like.  The report chronicles the experience of two Morehead City residents who rode out Hurricanes Irma and Maria on two different islands in the Caribbean.  One of these people is Sharp Kemp.  He and his wife, Margie, live on St. John’s and were there when Irma did significant damage and then when the island took a direct hit from Maria.  Allow me to read from the article:


Mr. Kemp wants to stay and rebuild his charter boat business, according to his father, Skip Kemp of Morehead City.


“He had three boats and lost two of them, but he’s alright,” said Mr. Kemp, who has sporadic contact with his son when he’s able to get a signal on the ravaged island.


“A lot of houses around them were destroyed, but they still have a roof,” said Skip Kemp. “Right now they are staying at [Margie’s] father’s house on the island.  They’re putting up about 20 people who have been displaced from their homes.”


He said Ms. Kemp’s father, Tom Coxe of Suffolk, Va., was on the island during Hurricane Maria.


“He had gone down to take relief supplies before Maria hit, and then he got stuck on the island.  He’s still there helping,” Mr. Kemp said.


Perhaps the opposite of defiant individualism is radical selflessness and hospitality – an orientation to employ who you are and what you have in the service of others.


The man without the wedding garment is judged rather harshly for his defiant individualism.  He is cast out of the wedding celebration where the community is gathered.  Focusing on self-interest alone actually has the effect of impoverishing his life.  The same judgment holds for anyone who presses upon others a defiant sense of individualism; be it in a family, a neighborhood, a community, or a church.  Such persons limit their world, their existence, and their spirit to their own finite vision of life; never once thinking they could find something greater if they just looked beyond themselves.


Martin Luther talked about sin as being “incurvatus in se” – a state of being turned in on one’s self to such a degree that no one else matters.  In the final analysis, unwillingness to let go of self in order to join with others blocks a person’s path to fuller life in God’s kingdom.


Through this parable, Jesus invites each of us to put on the garment of selfless humility and to join with a community of faithful believers in order to experience the richness and joy of God’s kingdom on earth.  How are you going to respond to this invitation?  What of yourself do you need to lay aside in order to accept it?
Posted by Keith Emerson at 9:01 AM 1 comment: