Finding Hope in the ordinary Apocalypses of Daily Living 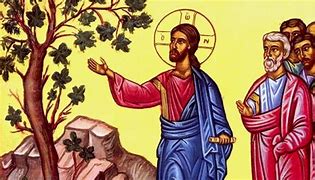 How would you like to do what Jan Richardson did for two straight weeks?  When she was in seminary she was part of a group of twenty students and professors who began each day with Morning Prayer and then, sitting in a circle, took turns reading aloud and straight through the entire Book of Revelation.  Slowly, over time and after repeated readings, what began to emerge from the experience for Richardson was a sense of the book’s astounding beauty and power amidst its images of devastation.

It is curious how we always begin the new year in the Church calendar by going to the end.  Today, like all first Sundays in Advent, we encounter apocalyptic visions about the end times… a time called “the day of the Lord” by many of the Old Testament prophets.   The bible is so clear about the beginning… the place where you and I might start the Church year.  We can all quote from Genesis 1:1… “In the beginning God created the heavens and the earth.”  And we can all recite John 1:1… “In the beginning was the Word and the Word was with God and the Word was God.”  Even while the bible seems to say a great deal about the end, the imagery and language it uses is not nearly as easy to understand as what it says about the beginning.  Apocalyptic writings play on our fears of the future and fuel our sense of anxiety and dread.  So why start the new year here?

Richardson suggests most people take one of two approaches to the bible’s apocalyptic literature.  Either we maintain an embarrassed silence about it or we approach it as if was a codebook for the end of the world.  When we approach it as a codebook we are tempted to dissect all of the images in order to decipher a solitary meaning.  Emerging from her experience over those two weeks, Richardson suggests a different way to read apocalyptic writings… a way she calls ‘devotionally.’  This approach, she writes, “beckons us to sit with the sacred strangeness of the text until the connections begin to surface, until – its visions of destruction and desire, loss and redemption, ending and beginning – we see those rhythms in our own lives, in the ordinary apocalypses of our daily living.”

Do you ever think of your own life as being a series of ordinary apocalypses?  Probably not, especially if you think of ‘apocalypse’ the way most people today do: a kind of massive, large-scale catastrophe.  But that is not how the biblical writers used the word.  ‘Apocalypse’ is a Greek word meaning “to uncover,” “to reveal,” or “to make known.”  More often than not, apocalyptic writings emerge in times already ominous and threatening, not to predict calamity, but to assure the readers of God’s care and keep in the midst of conflict.  The apocalyptic images of the bible, when taken as a whole, paint a picture of hope.  They reveal or uncover the potential and promise of new life on the other side of struggle, loss, and death.

When Luke writes his gospel, the Christian community is reeling both from religious persecution and the devastating effects of the Roman army’s destruction of Jerusalem in 70 AD.  So Luke remembers Jesus’ words stating these things will take place.  What is most powerful in our Lord’s apocalyptic revealing is not the omen-laced imagery or dire signs, but the instruction about what to do when it all unfolds.  You might expect Jesus to say when the fur begins to fly, duck and take cover.  This would be prudent.  This would make sense.  But this is not what Jesus says.  Instead he tells his followers to stand up and raise their heads because their redemption is drawing near.  It is a powerful call to have courage rooted in the hope no matter what happens God will prevail.

Why do we begin the new year by focusing on the end?  Well, it is kind of like one of those movies where the opening scene is actually the end of the story and then the rest of movie shows you how the drama gets to that point.  What God has uncovered to us is the end of the story.  We know how history will end… with Jesus redeeming all of creation.  But before then, we have to attend to the ordinary apocalypses of daily living… those personal and collective moments when we need to remember the message of hope ringing throughout the bible.

I was privileged in seminary to be mentored by the Rev. Ed Campbell.  In 1996, medical tests disclosed he had a substantial tumor in his left lung and a cancer that had moved to other parts of his body.  In telling the congregation about his condition, Ed said, “I have no idea what this means for me in the future, but it doesn’t take a rocket scientist to figure it out.”

Over the next six months Ed shared his journey not only with the congregation, but also with the whole community through a series of weekly articles he wrote for the local newspaper.  It was a remarkable six months that transformed many, many lives.  In the last column Ed wrote before he died, he described a time he was feeling weak and down in the dumps, but his wife pestered him to get into the car without revealing where they were going.  The trip led to an ice cream cone and watching a fantastic sunset.   Here is Ed’s reflection on such an ordinary moment, which he initially resisted:

The message I’m looking forward to every day of my life, from this moment on, is that there is joy everywhere, if you just look for it.  Or, to say it another way, God is always around.  He is always in the business of redeeming – that is, of turning what looks like a crummy deal into a real possibility.

Jesus might have said to his followers “a real crummy deal is coming your way, but when it does, take heart, stand up, raise your head, because a new possibility is on the horizon.”  By faith we know this to be true about the end of all time.  By experience, we also know it to be true of the ordinary apocalypses of our life.  There will always be a crummy deal coming your way.  Not a one should come as a surprise.  But what we need to know, what we need to expect, and what we can surely count on. is God will work out something wonderful through it, if we are open to God’s presence.

This is the message we begin the new year with.  There will be some tough times in the days ahead, but God is going to turn each one into real possibilities.


Posted by Keith Emerson at 4:02 PM No comments: