Faith Over a Distance 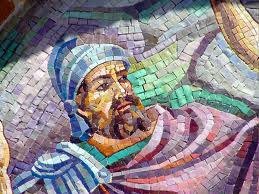 Today we learn about a person we do not meet – a Roman centurion stationed in the town of Capernaum. As his title implies, he commands a “century” of one hundred foot soldiers. There were ten centurions in a cohort, sixty in a legion. These leaders were working officers and the backbone of the Roman army. One historian from the time recorded that “centurions are required not to be bold and adventurous so much as good leaders, of steady and prudent mind, not prone to take the offensive or start fighting wantonly, but able when overwhelmed and hard-pressed to stand fast and die at their post.” Centurions were well-paid career men responsible for the discipline and drilling of the soldiers under their command.


In today’s reading, we never meet personally the Capernaum centurion nor does he have any direct lines in the narrative. We learn of him through others. We hear his words through others. Yet even in this round about way we get to know him. We learn that he owns a slave, something not uncommon in the culture and time. We learn that he “highly values” his slave - the words chosen by Luke to constitute this phrase suggest a deep, personal affection; something well beyond being a prized asset or good worker. And we learn that the slave is ill and close to death.

The centurion would have been well informed about the comings and goings of the town where he was stationed. He has heard about Jesus – about his healing powers – and knows that Jesus is in town. He wants Jesus to tend to his slave. He could have gone to meet Jesus himself, but didn’t. He could have sent some of his soldiers to ‘invite’ Jesus to come to his house, but didn’t. He sends local Jewish religious leaders to make an appeal on his behalf and they could not have made a more compelling case: “He is worthy to have you do this thing. He loves our people [and you can be sure that not many Jews would say that about most centurions] and it is he who built our synagogue for us.”

Jesus is convinced and makes his way toward the centurion’s home. Before he gets there he encounters another group sent by the Roman official with a message: “I am not worthy to have you come to my house. Only say the word and my servant will be healed. I know what it is like to give an order to a subordinate with the confidence it will be carried out. I recognize that you have the same authority in this matter.” Jesus, amazed by the centurion’s faith, effects a healing without ever meeting him or his slave.

While there is much to ponder in this story, today I am especially curious about the dynamic of distance. I am impressed that Jesus understood the good he could do without ever being present to see it in person. And I am struck that the centurion understood he (and his slave) stood to benefit greatly by being in relationship with a person he never meets directly.

This is not the normal operating dynamic of our day, is it. We want to be hands-on, face-to-face. We feel connected to a person or to an office or to an institution by having direct, first person encounters. Modern technology and communication has enabled us to be in relationship with people all around the globe and to sense that we are an intimately involved with people we have never met. We now know people from Newtown, CT, Boston, MA, and Moore, OK and have been inspired by stories of their courage, selflessness, and loss. If you watch on a regular basis, say, the Today Show, you probably have a better sense of what is happening in Matt Lauer’s life than you do in the lives of your own adult children.

The dynamic of distance has important implications for how we live out our Christian faith and life. For example, we will feel a greater sense of reward if a team from the parish works on a Habitat project than if we take up a collection and send a $150 to support that work. Because modern communication has helped us “to be there”, we are more likely to contribute to tornado relief than we are to give to a general appeal aimed at general needs we know little about.

In our day, distance creates a sense of alienation and distrust. And yet, as the story of the centurion reminds us, sometimes it is important to have faith even though there is distance; where there is no face-to-face encounter or pre-existing relationship.

I was reminded of this last week as I attended a conference for diocesan coordinators of the Episcopal Relief & Development fund. This fund has been in existence for 74 years and during that time it has enable Episcopalians to respond to domestic relief efforts and to participate in international development projects. It began in 1940 as a way to assist refugees fleeing from Nazi Germany. Today its program functions revolve around...

 and responding to disaster and rebuilding communities.

$.91 cents out of every dollar you contribute goes to program based in one of these priorities. Helping donors feel connected to the good they do is difficult, but important work. When we watched the clean water/well video the distance between our Lenten fundraising and the good it would do got a little smaller. Still, it takes faith to believe that a check is going to make a difference.

While we were focused on clean water, many Episcopal congregations got excited about the Nets for Life initiative. A $10 donation purchases a mosquito net that is hung over a sleeping area and prevents the spread of malaria. The goal was to distribute 3 million nets, but enough money was raised for 5.3 million. They have been given out in over 40 countries. Tens of thousands of people have been trained how to instruct recipients to use the nets and to fight off common diseases. Episcopal Relief & Development estimates that this program has saved the lives of 109,000 children under five years old. Increased childhood health means that parents have more time to spend working, thus creating a better standard of living for their family. Episcopal Relief & Development plans to continue to work with net recipients to address other needs, such as clean water.

All of this is healing at a distance and it requires faith, doesn’t it. For us as givers, we must have faith that our donation will be used efficiently and effectively, that it will enhance the living conditions of another human being, and that it will be pleasing to God. The recipients must have faith that the gift will make their lives better. You can go to the Episcopal Relief & Development website to watch videos and read stories about some of the people touched by the program, but other than that we must have faith as Jesus did; that our act will be sufficient.

And most often, giving money and giving it at a distance is the best and most effective way to help. At the conference we heard the story of a saintly Episcopalian who was so moved by stories of a particular disaster and how many people had lost everything that she worked tirelessly to collect teddy bears in her community. She was so dogged and effective that after six months she filled an entire tractor trailer. She then had a shipping company haul the load to an Episcopal Church in the affected area. Well, it was a small church with a worship space, tiny hall, and two little classrooms. They had nowhere to put a truckload of stuffed animals and, in fact, had no need for a truckload of stuffed animals. The geographical distance had been overcome, but it made little actual difference.

Most often we are at our Christian best when we are present with another person. But there are times when we must have faith that our efforts overcome distance. We exercise this every Sunday when we engage the Prayers of the People. As individuals we probably know personally only a few people being prayed for. Most likely this week many of us will have direct contact with only one or two people on the list. There is a distance between us and the people we are praying for. And yet, does anyone here doubt that our prayers at a distance are not important? Does anyone doubt that our prayers at a distance do not make a difference; a difference in the lives of the people we pray for as well as a difference in us who offer the prayers?

Today’s gospel reading tells a unique story in Jesus’ ministry. This is the only time he heals at a distance a person he has not met. All of his other healings are done face-to-face. They are hands on events. Thus it is with our Christian faith and life. Most of what we do and most of what sustains us is an experience in the first person. It happens here at St. Paul’s or in our families or with our friends. Still, there are aspects of the faith that are carried out over a distance. Today we recognize that these acts are effective and celebrate God’s goodness and faithfulness in blessing our efforts to make a difference.