Jack and the Blindman 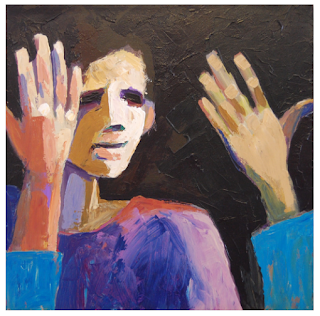 A dear Iowa friend of mine passed away a few weeks ago.  One of my favorite memories of Jack has him kneeling at the church’s altar rail flanked by his children and grandchildren.  They take up the entire rail and for this reason, although not wealthy by a monetary standard, Jack was perhaps the richest man I have ever known.  I met him soon after I accepted a call to serve as the rector of St. John’s Church in Keokuk.  He was an immensely likable fellow; tall, with a warm smile and laugh I wished my own grandfather had possessed.  Jack was positive, even-tempered, and soft-spoken without being quiet or withdrawn.  Retired before we met, he spent most of his working career managing a local grocery store.  After I arrived, Jack began to spend more time at the church.  He tinkered with broken things, kept the lawn mowers in good repair, and coaxed to life the ancient boiler every time the outside temperature dropped.


The parish’s custom was to have the rector appoint a Senior Warden while the Vestry elected a Junior Warden (some churches still do this and refer to them as the “Rector’s Warden” and the “Peoples’ Warden”).  Typically, the priest asked one of the local bank presidents (all of whom were members of the congregation), to be the Senior Warden.  One of these bankers, Ed, filled the office during the interim period through the first year of my service.  One day he came to me to let me know the time had come for him to step down.  Ed told me I needed to think about appointing a new Senior Warden and asked if I had anyone in mind.


Now, as I said, the local tradition had several prominent members rotating through various parish leadership positions on a regular basis.  They were all good folks who were dedicated to the betterment of the town as well as the parish.  The only problem was none really wanted the job.  Would they do it if asked?  Yes.  But was it their ministry or calling?  Not at that time.  I sat through more than one conversation where these gentlemen negotiated who would have to do what at the church over the course of the next few years.  “I just got off the Vestry.”  “It’s not my turn.”  “I am already on community boards X, Y, and Z so I don’t have the time.”  I had the impression the church’s officers were “selected” by who lost a card game at the local country club.  I longed to have a Senior Warden who would be enthusiastic about the job; who would see the work as a calling, not a duty; as a ministry, not an obligation.


So when Ed asked me if I had anyone in mind, I said yes… Jack.  I can still see the look on Ed’s face.  It was a mixture of shock and support; the kind of look indicating the notion of Jack as Senior Warden had never occurred to him, but it might just work out.  Well, Jack accepted my call and – guess what – it worked out beautifully!  He provided an example of leadership that was just what the parish needed at the time.  He was enthusiastic and willing to roll up his sleeves and get to work.  And whereas the bankers always had to negotiate with one another as competitors as well as parishioners, everyone thought of Jack as a friend.  After three years of service, the one and only downside to having Jack as Senior Warden was no one felt capable of filling his shoes!


I all my years of ordained ministry, asking Jack to be Senior Warden is one of the ten best things I have ever done, and I am still working on the other nine!  I saw something in him previous clergy had not been able to discern; perhaps because their notion of leadership was too small or too conditioned by the limitations of the local setting.  To pick up on the language of today’s Scripture readings, we might say they were blind.


Consider the reading from the Old Testament.  God appoints Samuel to anoint a new king.  Now, God knows Samuel is going to need a lot of assistance if he is going to get this task right.  So God tells the prophet what city to look in – Bethlehem.  And God even tells him which family to check out – the house of Jesse.  But, even with all this guidance, Samuel almost goofs it up.  He wants to choose the oldest, who is tall and dashing.  But God says no, don’t judge by outward appearances, rather, look at what is on the inside; look at the heart.  By focusing on conventional methods to gauge a person’s potential, Samuel exemplifies what it means to be spiritually blind.


Jesus confronts several layers of blindness in today’s gospel reading.  The first is physical.  A man blind from birth comes to him to be healed.  As the story unfolds we learn something truly remarkable: of all the manifestations of blindness, physical blindness is the easiest to cure.  A little dirt, a little spit, a quick wash of the face and, waala… sight!


The rest of the story deals with the more difficult aspects of blindness:


§ The inability to see God at work in the story of the blind man (“perhaps he was never blind in the first place”).


§ The inability to see Jesus as being the One sent from God.


If the restoration of physical sight is the main objective, the story should have ended after only a few short verses.  The more pernicious and persistent blindness is the inability to see how God is present in one’s life and the inability to recognize what God seeks to do though a person.


We have all had the experience of underestimating or undervaluing the gifts of another.  We have all been like Ed when first presented with the possibility Jack can fit the bill.  Ed was spiritually blind; unable to see what God saw in Jack, just as Samuel was blind to what God saw in David.


But here is a twist to Jack’s story.  Ed was not the only person blind to Jack’s potential.  The other person blind to what God could do in and through Jack was… Jack!  When presented with the opportunity to be Senior Warden, Jack hemmed and hawed; not like the bankers who did not want another responsibility, but because he did not see himself as capable or qualified to hold the office.  After much “encouragement” (my spiritual word of “arm-twisting”), Jack said to me, “Well, if you think I can do the job, I’ll accept on one condition – if you ever find that I am not doing a good job, you have to let me know so I can step down.”  “Deal,” I said, confident I would not have to follow through on the promise.


Allow me to point out two truths from today’s readings.  One you probably saw, the other you probably didn’t.  Jesus says to the blind man, “I am the light of the world.”  Jesus is the one who delivers us from darkness to light; from blindness to sight.  He is the one who leads us and guides us; who illumines our minds and stirs our imaginations.  This, I trust, you have heard before.  Here is what you may have missed.  It comes from Paul’s letter to the church in Ephesus.  “Once,” he writes, “you were in darkness, but now in the Lord you are light.  Live as children of the light.”  Did you catch that?  Jesus says, “I am the light of the world.”  Paul writes to the faithful, “When you are in Jesus you are light.”


The story of Ed and Jack is just one of dozens from parish life I could point to as being a healing of blindness.  Ed, to his credit, soon came to appreciate what Jack could do for the church.  He became one of Jack’s biggest supporters and most vocal cheerleaders.  Jack, in his own, humble way, grew in confidence and in the esteem of the congregation.  He came to see himself as a leader with much to offer.  And, to be honest, even though I saw potential in Jack, I never guessed how gifted he turned out to be.  I saw for myself how someone who is right on the inside can be empowered to serve God and God’s people.


Jack’s story, like that of the blind man and the boy David, hints at the potential of each and every person in our faith community and in our lives.  It reminds us to look at one another with new eyes; eyes that somehow try to take in what God is doing in our midst through our work and ministry to one another.  And it reminds us to look at ourselves in a new way too.  Every person who is in Christ, young or old, rich or poor, educated or untrained, is light and is called by God, equipped by God, and commission by God to do great things.


Posted by Keith Emerson at 9:56 AM No comments: