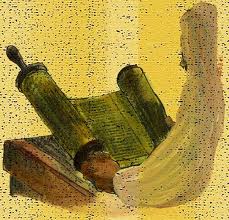 Have you ever noticed how the reference to most of the biblical readings in the bulletin looks something like this: Philippians 4:1-8, or Mark 12:24-30? They are straight from the bible… with no omissions. But every now and then, the framers of the lectionary try to slip something by us. Like today: a reading from Nehemiah 8:1-3, 5-6, and 8-10. What happened to verses 4 and 7? What do they say and who decided you and I won’t get to hear it?

Well, let me set the record straight and reveal what is being kept from you. Verse 4:

The scribe Ezra stood on a wooden platform that had been made for the purpose; and beside him stood Mattithiah, Shema, Anaiah, Uriah, Hilkiah, and Maaseiah on his right hand; and Pedaiah, Mishael, Malchijah, Hashum, Hash-baddanah, Zechariah, and Meshullam on his left hand.

And now for verse 7:

Also Jeshua, Bani, Sherebiah, Jamin, Akkub, Shabbethai, Hodiah, Maaseiah [wasn’t he on the other side in verse 4?], Kelita, Azariah, Jozabad, Hanan, Pelaiah, the Levites, helped the people to understand the law, while the people remained in their places.

You know, this is the first year these two verses have been omitted. I used to so look forward to the Third Sunday after the Epiphany, Year C, because some poor lay reader had to make his or her way through – and I think we can all agree on this description – these unpronouncable names. There are not a lot of perks in the clergy business, and they just took away another one. I remember one time years ago when a seasoned reader stood at the lectern and said,

Ezra stood on a wooden platform that had been made for the purpose; and beside him stood some guys on his right hand and some other guys on his left hand.

Well, it is sad that these moments of improvisation and torture are no more.

Removing the reading of all those names does not diminish the fact that this passage is an important Old Testament lesson. It speaks about a spiritual struggle we still engage today and while it takes place nearly five centuries before Jesus’ ministry, there is something about it that feels like a New Testament moment.

Let me give you some background. The temple and the walls around Jerusalem were in ruins when exiles returned from Babylon in the closing years of the 6th century BC. Leaders like Nehemiah and Ezra the priest soon rallied the people to engage in a huge public restoration project. During the course of this work someone uncovered ancient scrolls of scripture.

These were and are the words of God and, because the exiles were not allowed to take the scrolls to Babylon, no one had read them or heard them read for nearly two generations. While in exile the Jewish people carried on with their faith traditions as best they could based on their memories. But memories can be faulty. Huge gaps in the faith tradition can go undetected while what are minor points can be overemphasized almost to a fault.

So once the city’s wall was repaired, it was time to do some repair work on the human soul. All the people gather around. Ezra reads and he chooses a couple dozen leaders to lead what are essentially small group discussions so that the people understand fully what they hear.

I had a friend in high school who went out for the track team in the high jump. He worked very hard at it day in and day out. We were at a huge meet and he represented our school. Before his event began, I found him, and wished him luck. He looked very dejected. Because this meet attracted the best athletes for miles around, the bar for the starting jump was set at 5’8”. My friend’s best jump ever was 5’4”. There was no way he was going to make it out of the opening round. Those four inches might as well have been four miles. It was a gap he simply could not overcome.

If you can imagine how he felt at that moment then you can understand how the people in Jerusalem felt the day when they heard God’s word read aloud. They were good and faithful people trying their best to do what they imagined God wanted them to do. But then, in an instance, in a holy, sacred moment, they learned just how far away they were from living lives that actually pleased God according the standard set by Scripture. And, in their minds, the gap between what they were doing and what they learned God expected was overwhelming.

Now I don’t want to minimize the sins and shortcoming of those folks gathered back in the day. I don’t want to say that it was unimportant. I don’t want to say that the people should just ignore it. Somehow, someway, they had to come to grips with their behavior and move forward. Ezra knew this, for sure, but notice what he does. He calls for a party! He calls for a celebration… a celebration of all that is good and godly in who the people are. It is to be a celebration rooted first and foremost in God’s love. Look at what Ezra says, “This day that we have seen the gap is a holy day. Do not be grieved. The joy of the Lord is our strength.” That is New Testament theology.

I once heard a pastor pronounce the absolution of sin after confession with these words:

I think back to my high school friend. That meet came early in the season. He did not give up on the high jump or on himself. He kept at it day in and day out, meet after meet, working to get better. And do you know what, by the end of the season he was clearing 5’8” with ease. There is a parable in that story for us today. It calls us to know the gap in our lives by understanding scripture, to acknowledge that the gap exists, to celebrate what we can do, and to allow God’s grace to work on what we can’t. I don’t know what Maaseiah and the others told the small groups they led, but if I had been in charge of one, this is what I would have told them.

Posted by Keith Emerson at 11:39 AM No comments: