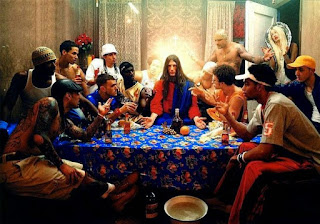 J.R.R. Tolkien told a story about a man who bought a field littered with old stones once part of a great hall.  He used some of the stones to build a house in which he now lived.  The man used the rest of the stones to build a tower.  The neighbors and townsfolk saw the tower and thought the stones should have been carefully inspected for hidden carvings and inscriptions.  A few held there might be a deposit of coal under the soil and complained the tower inhibited their ability to find it.  The man’s own descendants thought the stones should have been used to enlarge the house, which they one day expected to inherit.  All the critics had two things in common.  First, they spoke openly about what they disliked and second, not a single one of them ever climbed the stairs to the top of the tower.  What none of them knew, according to Tolkien, is that from its high vantage point the man could look out upon the sea.


John Osborne, the British actor and playwright, once said, “Asking a working writer what he thinks about critics is like asking a lamp-post what it feels about dogs.”  Yes, there are some who can comment to us about something we need to hear and consider.  Their insight and feedback is invaluable, especially when it is offered in love.  Someone once observed “criticism, like rain, should be gentle enough to nourish a person’s growth without destroying his or her roots.”  But there are some who want to clip our wings only because they themselves can’t fly.  Like the people gathered around the tower, they criticize what they don’t or can’t understand.


In today’s reading from the Gospel of Matthew we learn Jesus is roundly criticized by many of his “generation” – a term hinting at a large and diverse segment of the population, not just an elite ruling class of politicians and religious leaders.  This group complained about John, saying his lifestyle was too austere.  Now they say Jesus eats and drinks too much.  They say he is a glutton and a drunkard.  They also complain about the company he keeps.  His friends are sinners and tax-collectors.


Do you have critics?  Most of us do.  For clergy it is an occupational hazard.  Years ago I interviewed with a church and I forget how it came up, but the folks I was meeting with told me (as if it was some kind of selling point) there were only 2 or 3 people who would pull me aside during the final hymn and recessional to tell me what I did wrong during the service.  “While we are singing,” I asked?  “Yes, only two or three people.”  I don’t who the parish eventually hired, but I say a prayer for that priest every Sunday during our closing hymn.  To be fair, I also know some clergy who are nothing but critical of the churches in which they have served; always spewing forth a litany of the things the congregation does wrong.


Again, do you have critics?  How do you deal with them?  Do you hold their corrosive words too close to your heart?  Do you deflect every arrow critics shoot, but in the process remain shielded against feedback that might be helpful and necessary?  Do you become reactive and lash back at those who attack you?  Do you shut down and vow never again to expose yourself by acting or caring?  Do you attempt the impossible by trying to please everyone?  Aristotle advised his followers “to avoid criticism say nothing, do nothing, be nothing.”  Short of this, criticism is something each of us must face.  How do you respond to it?


In today’s reading, Jesus does three distinct things in the face of criticism.  First, he sets an objective standard by which he evaluates himself.  “Wisdom,” he says, “is vindicated by her deeds.”  Elsewhere he says, “You will know a tree by the fruit it bears.  Good trees bear good fruit, bad trees do not.  Bad trees cannot bear good fruit.”  So it is, Jesus says, with people.  Good people doing good things in a good way can stand apart from whatever criticism comes their way.  So set you own standard and set it high.  Learn to live with yourself and let go of things said that are unfair or unwarranted.


In his prayer to his Father, Jesus points to a second way he responds to criticism.  He prays, “Father, I thank you that some things are hidden from the wise and intelligent and revealed only to infants.”  Jesus understands not everyone gets it.  Not everyone knows who he is or what he is about.  Not everyone understands who you are and what you are about.  And, not everyone who doesn’t get it is a critic.  Many of us learn how to keep our mouths shut and our minds open.  Critical people are just the opposite.  Their minds are closed, but not their mouths.  Jesus understands there is little he can do to change them.


The third thing Jesus does is to explain who he is and what he is all about to those willing to listen.  He speaks to the sinners and tax-collectors who don’t measure up to society’s standards.  “Come to me,” Jesus says, “all who weary from carrying the burden of heavy expectations placed upon you by others.  Take off their yoke and learn from me.  My yoke,” he says, “is easy and my burden is light.”  Jesus is not the only person of his generation who bears the weight and burden of criticism.  He invites people to join him in a life lived for God by having respect for the dignity of others.


It is not the critic who counts; not the person who points out how the strong one stumbles, or where the doer of deeds could have done them better.   The credit belongs to the person who is actually in the arena, whose face is marred by dust and sweat and blood, who strives valiantly; who errs and comes short again and again; because there is not effort without error and shortcomings; but who does actually strive to do the deed; who knows the great enthusiasm, the great devotion, who spends himself in a worthy cause, who at the best knows in the end the triumph of high achievement and who at the worst, if he fails, at least he fails while daring greatly.  So that his place shall never be with those cold and timid souls who know neither victory nor defeat.


I think Jesus would embrace this as part of his yoke.  I think he encourages us to do all we can with our God-given abilities and passions.  There will always be those who don’t understand who we are and what we are all about.  Nothing is stopping us from inviting them to climb our tower so they too can look out over the sea.  If they decline, well, it is there loss.
Posted by Keith Emerson at 10:05 AM No comments: