Get Up! Get Going! Get After It! 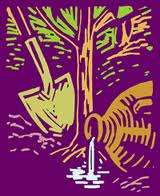 In the reading we just heard, some folks engage Jesus in a conversation about an act of violence. Pilate’s henchmen slaughtered a group of Galileans while they were making a sacrifice in the Temple. Keep in mind that Jesus is a Galilean and he is carrying out his ministry in Galilee. This must have been a hot topic for many in the area. If they had had talk radio back in the day, it would have lit up the phone lines. Then as now, senseless acts of violence spark outrage. Unlike, say, the Newtown shootings, this brutality was perpetrated not by one disturbed individual, but rather by the ruling political authority. Having grown up in Northeast Ohio, I would compare it to the 1970 Kent State shootings. I was nine at the time and was largely shielded from those events that took place fifteen miles from my home, but I can tell you that even today feelings run very, very deep with regard to what happened on May 4th.


It is not at all clear why the temple incident is brought to Jesus’ attention. Did he know any of the people who were killed? It is possible, but the text doesn’t say. And while we are not told why the question is asked, but you can be sure that people wanted to know what Jesus though should be done about it. Was he willing to rise up and lead a revolt?

It is Jesus himself who changes the conversation from what to why. His focus is not on what to do in response, but rather on why it happened. It might be more accurate to say that Jesus refutes a popular notion of why it happened. “Do you think those people were worse sinners than the rest of us? They were not.” And then Jesus refers to eighteen people who died when a tower collapsed. “Do you think they were worse sinners than the rest of us? No.”

To each statement Jesus adds the tag line, “Unless you repent you will perish as they did.” It is a jarring proclamation. Is Jesus really saying that violence and catastrophe await those who do not get their act together?

The parable he tells seems to reinforce this rather harsh teaching. A man plants a fig tree in his vineyard, but after three years it still does not bear fruit. In frustration he tells the gardener to cut it down, but the gardener pleads for more time. “Let me dig around it, fertilize it, care for it. If in another year it does not bear fruit then we will get rid of it.”

It is certainly not true that bad things only happen to bad people. Do you remember when Katrina devastated New Orleans and the gulf coast? Do you remember how some people said God created the hurricane to judge the city? When faced with something we cannot explain there is a human tendency to assign it to God’s will. “God has his reasons,” we say. A portion of our biblical tradition encourages this thinking. The Noah flood story is couched in terms of God’s judgment on human evil. But even there, at its end, the narrative tells us that God promises God’s self never again to act in such a way. Or we read of Abraham interceding on behalf of the city of Sodom, “God, would you not spare the city if it has just five righteous people in it?” “Yes,” God responds, “I would spare it.”

The truth is that we live in a world of randomness. There is not always a reason misfortune strikes one person and not another: why a car careens out of control and smashes into someone else rather than into me or why someone else gets cancer and I don’t or why a tornado cuts through one part of town, but not where I live. It happens that way because that’s the way it happens.

This, I think, is what Jesus is trying to say. Those people who were killed by Pilate and those people who died when a tower collapsed didn’t deserve it any more than any of the rest of us. It just happened. So how should you respond to this? When Jesus says, “Unless you repent you will perish as they did,” I hear him saying that life is short and carries no guarantees. We may be comfortable now, but each of us will know hardship and struggle. Therefore, he says, there is no time to waste. Get your affairs in order – that is number one. And number two – make your life count for something… starting today.

Get your affairs in order. I have been negligent in my duties as your priest, at least as far as one of the rubrics of the prayer book is concerned. To make amends, I ask you know to open your prayer book and turn to page 445. There we find the following:

The Minister of the Congregation is directed to instruct the people, from time to time, about the duty of Christian parents to make prudent provision for the well-being of their families, and of all persons to make wills, while they are in good health, arranging for the disposal of their temporal goods, not neglecting, if they are able, to leave bequests for religious and charitable uses.

Worse than dying suddenly is dying unprepared. For most of us a simple will will suffice. For young families especially, it is important that life insurance provides some finance assistance to help our loved ones move forward without us. As we get older and fewer people depend on us, we come to a joyous time when we can think about gifts that will support institutions that matter to us. I am grateful that Gail Pruden is working with Roy Waller, John Rector, Kent Spain, and others to raise awareness in the parish about making these kinds of gifts. For any of you so willing, I am more than happy to sit down and help you think through the details of the Burial Office – the last rite each of us will be a part of in the Episcopal Church. Picking out hymns and readings and articulating other details is a great gift and comfort to family members who otherwise might be groping to discern your wishes.

As a footnote, please don’t ask me if I have tended to these things. This is one of those times when you should do as I say, not as I do. I shudder to think of the mess I am leaving for family to sort through. Perhaps from time to time you can gently ask me if I am making any progress. It might encourage me.

Make your life count for something. If you feel like your life doesn’t matter then you need to make a change and you need to do it now. God’s world is pregnant with opportunity and groaning with need. This Lenten season we are pointing in this direction by reflecting on what we offer to God and to others. We have invited you to bring food and drink to distribute through our Food Pantry. Next week we invite you to bring a dish to share at an informal Breakfast Eucharist in the Parish Hall at 8:00 or Brunch Eucharist in the Parish Hall at 10:30. In two weeks we invite you to bring in change so that we can fund a well for a family farm in an underdeveloped part of the world.

Make your life count for something. I know that this is a hard time for several families in our parish who are effected by the sequestration. A 20% drop in income is very difficult to weather. What can you do with your day off that will be redeeming? How might you invest it in your family, your community, or in yourself?

This morning we hear Jesus issue what we today refer to as a ‘wake-up call.’ A senseless act of violence and a horrific tragedy serve to remind us that life is short and comes with no guarantees. For Jesus, this is not cause for sadness or anxiety, but rather serves as motivation. In the parable of the fig tree, Jesus is not the vineyard owner who wants to do in the fruitless tree, he is the gardener, working diligently to nourish us for good works. He tells us to get up, get going, get after it right now. There is not a minute to waste.