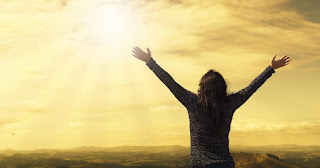 Are you going to watch the World Series?  There was a time when October meant baseball, but that day is gone.  The game has changed dramatically in recent years.  Once it was driven by strategy and a manager’s intuition, which was honed by years and years of experience.  His decisions invited admiration when things worked out and second-guessing when they didn’t.  Today, baseball is ruled by analytics - a deep analysis of numbers and probability of outcomes.  Given the formula to follow, even I could manage a major league team!

Analytics has demonstrated, for example, it is better to try to hit a home run and strike out than to sacrifice an out by bunting a base runner from first base to second, thus putting him in a better position to score a run.  The sacrifice bunt – giving up yourself as a batter in order to advance the greater cause of the team (what once was at the heart of baseball’s strategy) – has gone the way of the VHS overnight rental store.

Can there be a more apt metaphor for our times than the lost art of bunting; of sacrificing your own desires for the greater good of all?  We live in age of ‘swinging for the fences’, of go for it with no regard to your impact on the world around you.  You define what is best for you.  Keep the focus on you and what you can accomplish, no matter what the cost.  Never ever subjugate your personal aspirations for something bigger than yourself.  The only thing that matters is you take your cuts and try to crush the next pitch deep into the outfield bleachers of life.

Does any of this matter?  Well, yes.  Reflecting on our country’s resistance to what healthcare professionals’ recommend to combat the spread of Covid 19, David Brooks, the New York Times columnist, wrote a piece in which he lamented today’s generation could never have won the second World War because we would not be capable of making the personal sacrifices necessary to defeat the Nazis.  “We are not asking you to storm the beaches of Normandy,” he wrote.  “Just wear a mask in public.”

If disdain for personal sacrifice accurately describes where we are as a society, then what our parish church is doing today is absolutely counter-cultural.  We are asking you to make a pledge of good faith.

If you finances in the coming year unfold as you anticipate then you will donate X amount of it to St. Paul’s.  It is money you will never get back.  If your health and other variables remain as you expect then you commit to give X amount of your time to support the mission and work of this place.  It is a portion of your life you will not be able to dedicate to other things… from sleeping in on Sunday’s to not having to expend the effort to prepare a Church School lesson.  In essence, we are asking you to affirm the spiritual equivalent of baseball’s sacrifice bunt.  We are asking you to make a sacrifice.

From childhood, the people of Jesus’ world learned the meaning of sacrifice.  It was their custom, whenever they went to the Temple on high holy days, to present to God their choicest lamb or goat or dove.  This meant giving up something extremely valuable to them.  Still, they held one did not approach God without such sacrifice.  They never would have considered sacrificing anything blemished or anything cheap.  Only the best would do.  Furthermore, what they offered was proportionate to their wealth.  If they were poor, a dove was fine.  If they had more of this world’s goods, then they made a sacrifice aligned with their blessings.

Much of the way the people of Jesus’ day thought of sacrifice has been lost to us.  Webster’s Dictionary offers three possible meanings for the word ‘sacrifice.’  The third is “something given up or lost.”  Is this how you think of your pledge?  It is something once under your control, but now lost to you.  The second possibility is “surrender of something for the sake of something else.”  This understanding is more in line with baseball’s notion of the bunt.  You contribute some of your money and your time to advance the cause of the parish team.  At the deepest level, the original use of ‘sacrifice’ simply meant “an act of offering something precious to a deity.”  In this sense, a sacrificial offering is made in order to be in relationship with God.

It is something akin to this.  Suppose you have a young daughter or a granddaughter who presents to you some piece of ‘art’ she has created.  It is her gift to you.  But even more, she is making a type of sacrifice.  Hers is not an offering of great monetary value.  It does not have the quality of a museum masterpiece.  She offers her drawing to you because she made it.  And she offers it to you because she is your child or grandchild and you are her parent or grandparent.  She offers it to you because it is one of the ways open to her to build relationship.  She digs deep for the absolute best she has to offer and gives it to you.

This is not a sacrifice of something given up or lost.  It is not a sacrifice of surrendering something for the sake of something else.  It is a sacrifice of something precious in order to be in relationship with you.  In our current use of the language, ‘sacrifice’ doesn’t even seem close to the right fit.  This girl’s offering is done in love and in hope and in confidence (surely she never dreams the recipient will say, “What do you expect me to do with this amateurish piece of rubbish?”).  She anticipates her offering will be reciprocated; not with more riches and wealth, but with a deeper, more rewarding, and more personal connection with a person she values.

This it is why, for example, the first thing Abraham does when he enters the land of Canaan is to construct a crude altar of rough stone to enable him to offer a sacrifice.  After having sojourned in faith across much of the Middle East, Abraham wants to make sure this new homeland will be a place where he has a dynamic, living relationship with the God who called him there.

The Latin root for the word ‘sacrifice’ literally means to make sacred.  Jesus made his life sacred (or holy) by offering it completely to God.  At every Eucharist we remember his sacrifice when we say:

He stretched out his arms upon the cross,

and offered himself, in obedience to your will,

a perfect sacrifice for the whole world.

The same liturgy directs us to make three offerings, each one a deeper and more complete sacrifice than the one before.  First, we offer the fruits of our life and labor through two symbolic acts.  We present bread and wine; symbols of how we make good use of God’s creation.  And we present a monetary gift; a portion of the blessings we enjoy.  Next, we offer a sacrifice of praise and thanksgiving.  Our words, our thoughts, our prayers are drawn from a heartfelt place, expressions of our deepest devotion.  Finally, in the Eucharistic liturgy, we say these words:

And here we offer and present unto thee,

O Lord, ourselves, our souls and bodies,

to be a reasonable, holy, and living sacrifice.

The words of the Great Thanksgiving implore us to make the same complete sacrifice which Jesus makes.  We are called to offer not just our money, not just our songs and prayers and our praise, but our very selves.  “Sanctify us,” we pray, “so that we may faithfully receive this holy Sacrament, and serve God in unity, constancy, and peace.”

So this morning, we invite you to turn in a pledge card.  My question to you is this: What spiritual meaning and motivation and hope lies behind your response?  What kind of sacrifice are you making?  Are you giving up something?  Are you trading one thing for another?  Or are you reaching out in faith in order to be in right relationship with the Holy One?

Posted by Keith Emerson at 11:23 AM No comments: